OK so this was an interesting couple of days.  I had partial power in the house. Most of the original wiring was working and the new was not.  My washing machine was not working nor was the outlets that power my Internet and charges my computer.  That was probably God working there cause as long as the Internet was down my productivity went up.  It took the electrician a couple of hours to fix the problem and then he said the wires going from the inside circuit breaker box to the outside box needs to be put back in some sort of shielding because the way it is now is very dangerous.  I am not sure why Rick took it out of the metal conduit but it has to go back in.  He also told me not to put Sheetrock over the junction boxes without putting in an access panel (another trip to Lowe’s dang gone it).  Remember that.  If you put in a junction box, do not cover it up.  You have to be able to get into it at a later time, if need be.

Last night I ripped out sink base cabinets finally.  For some stupid strange reason I wanted to hold on to those cabinets.  Once I started ripping them out I realized the wood was dry rotted and it had lived out its useful life expectancy.  I probably could have squeezed a few more years out of them but I chose not to.  When I got down to the base part I was nervous thinking I was going to find a rat skeleton.  I finally ripped it out and then when there was nothing under there but dirt I was disappointed.  LOL 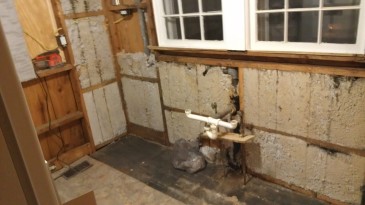 I found a board that said Mrs Jim Gates.  I guess they had a stack of wood delivered.  It was old time handwriting.  I think the house was added on to in the 40’s.  I am so sentimental.  I did not want to throw the board away, but I did.  I think in my next life I am probably going to be a hoarder.  ewwwwl.  Anyway I don’t know if you can see the writing or not…

I stopped collecting nails out of the boards.  I started throwing the nails in a bucket because I did not want to leave the nails in the board (to prevent accidents).  I was also curious about just how many nails I would wind up collecting from just in the kitchen.

The real reason is because I got tired of pulling nails so I started nailing them down into the board so I won’t stab myself or step on a rusty nail.  Some of these nails were so rusty that they were brittle and were breaking.  I still wound up stabbing myself in the legs with the nails no less than 4 times.  One time I thought I was going to bleed to death because I could not get it to stop bleeding for a long time. A  fter I got the bleeding under control I wanted to go to bed early but I kept pushing myself because I wanted to wake up to a fully gutted kitchen and move on to something else.  It took me until 2 this morning.

The nails pictured are in a gallon size bucket LOL

I woke up bright and early and started painting the logs.  About 8 AM I heard someone driving verrrrry slow down my driveway.  I was wondering who in the world this could be and I did not have the monitor on for my security cameras and I did not feel like firing it up so I had to go outside to see.  I was a little nervous because they were driving so slowly.  I was not sure what in the world was going on.  I stepped out on the back porch and called out and lo and behold it was my window!  You know the one I am talking about…. The one that was supposed to be here 3 weeks ago and then they finally got the window and made an appointment last Friday and I took the day off to be here for the install and they stood me up cause the braces did not come in and then she refused to do it on Saturday because according to her they don’t work on Saturdays and I got mad and made a negative report to the BBB.  Yeah, same people.  Kingsford. 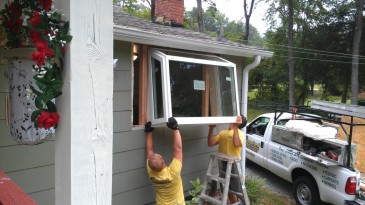 And all the wood got burnt up 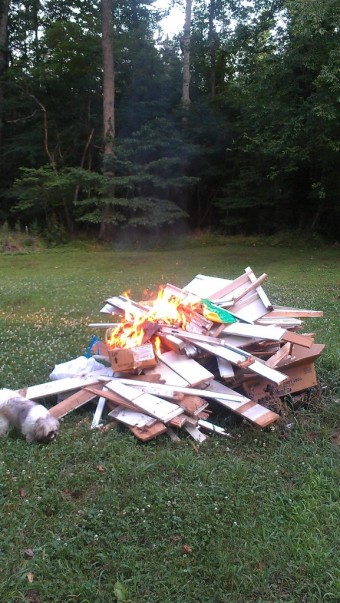 ok let me get back to work

12:03 AM…I had set a ‘go to bed no later than midnight‘ rule BUT I want to get all my drywall up TONIGHT.  It is going slow since I also have to put in the insulation and the paper on top of it.  I want to stop but I don’t want to leave my cabinets outside.  Bad idea because of weather AND possible thieves AND possums.  I am not even sure how I am going to get them in the house.  I should have accepted the help when I had the chance today.  SMH…I learned a lot of lessons from this renovation.  I will go over them at the end.  I do have one important piece of advice for anyone renovating though….go ahead and get your tetanus shot before you begin so when you stab yourself with a rusty nail (and you will) you don’t have to run to the hospital.

2:49 AM I am sooooo disgusted.   I did not finish the drywall.  I had cut outs to make and well, to be honest, I got sick of it.  I decided to pack it all up and call it a day.  The guy who is going to be doing the wall packed his tools in my storage room and I can’t get too much more in there so now I had to leave my cabinets outside under a tarp while his crap is dry and secure in my shed.  ain’t that a blip.  So I was able to get 2 pieces in the storage shed, I have 3 cabinets in place. and I decided to leave two outside and bring in the corner unit.

Oh my goodness.  It took me over an hour to get that frigging thing up the steps onto the porch,  then I could not get it through the door.  I tried turning it every which a way.  I have to get a wider door, this is crazy!!  Its now sitting on the porch under a camera and a shower curtain.

I am taking a shower and hitting the sack.  Going to bed pissed off again.  Here is the latest,  if you see something alarming I probably already have it on my list but mention it in the comments anyway. please. 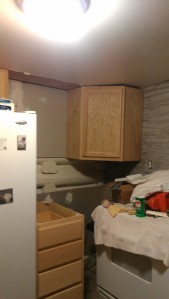 3 thoughts on “Let there be Power!” 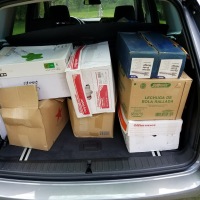 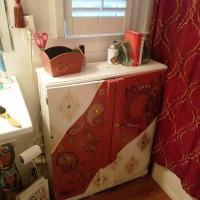 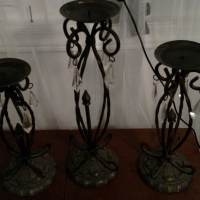 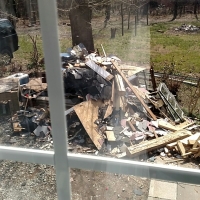